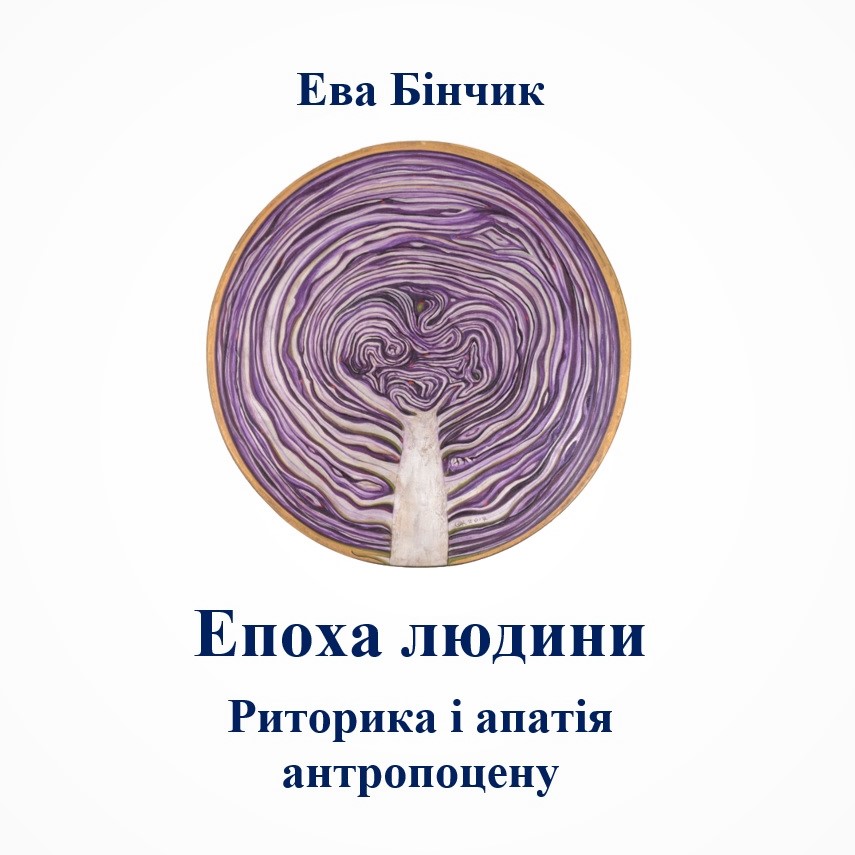 Ukrainian edition of Ewa Bińczyk’s book “The Epoch of Man. Rhetoric and Lethargy of the Anthropocene”

The military assault by the Russian Federation and its allies on independent Ukraine, which has been ongoing since 24 February, has resulted in the deaths of thousands of Ukrainians, unimaginable trauma and injury to survivors, and immeasurable material damage. The world will never be the same again. However, in the midst of these harrowing events, we do not want to, and cannot, lose sight of the bigger picture, which is a global issue. Bigger picture that makes it clear that the world will never be the same again. I am talking about the global climate catastrophe, the consequences of which may prove to be equally destructive.
This project is based on two assumptions: the first is that, in the midst of the fiercest war, it is not premature to think about the reconstruction of Ukraine, and the second is that reconstruction should take into account issues that affect the whole planet, irrespective of the administrative borders of states drawn on maps.
As a result of the project, Ukrainian politicians, intellectuals, scientists, economists, publicists and activists will receive the Ukrainian edition of the book “The Epoch of Man. Rethoric and Lethargy of the Anthropocene” by Ewa Bińczyk. The first edition of the book was published in 2018 by Polskie Wydawnictwo Naukowe.

The dominating motifs of the discussion on the Anthropocene are: the shocking, unprecedented scale of human impact on planetary systems, the problem of irreversible losses – the loss of biodiversity, the loss of nature, the risk of losing the future, the crossing of planetary boundaries – and, last, but not least – the dramatic impasse in climate and pro-
environmental politics (which the book refers to as the marasmus of the Anthropocene). The book tackles the unprecedented challenges faced by humankind in the 21 st century. Climate destabilization and the environmental crisis are presented as the most pressing problems of our times. These problems have significant social, political, economic, ethical, and existential dimensions.
The book shows that the debate on the Anthropocene is an intriguingly distinctive one on several levels. Firstly, on the discursive level, the uniqueness of the debate on the Anthropocene is rooted in the fact that it unites different disciplines in one common research agenda. We see how the idea of the Anthropocene has become a catalyst in deliberations between representatives of a wide range of research fields. Moreover, the book points out that the geological background of the debate has a universalising effect, uniting people, regardless of culture or society, in the face of the problem that is the destabilisation of planetary systems.
Secondly, the book shows that, on the philosophical level, the discussion reveals surprising paradoxes which make it possible to characterize the condition of humanity in the 21 st century. 1) Humans are presented as powerful and helpless at the same time. 2) The species homo sapiens is depicted as the builder of nature while at the same time being subject to the processes of planetary metabolism. 3) The future is presented as something in danger of being lost even though, in fact, the future will always exist in one form or another. And, finally, due to the central problem of irreversibility, 4) the possibilities of human action are portrayed as shrinking, but, simultaneously, each decision is interpreted as acquiring unprecedented importance. We also see in the book the way in which the debate on the Anthropocene constantly problematizes anthropocentrism and, at the same time, the very fundamental dichotomy of man vs nature. Additionally, the book argues that, on the theoretical level, the discussion on the
Anthropocene challenges many important assumptions; first and foremost the notion of the linearity of time and the idea of continued human existence on Earth. The debate also introduces and popularizes new and interesting categories forming a cohesive, novel lexicon (post-history, geohistory, hyperagency of humankind, planetary boundaries, post-nature, loss of nature, Gaia, climate divide, classes of the Anthropocene, climate apartheid, climate debt, point of no return, irreparable loss, Capitalocene, “apocalypse forever”, Earth’s metabolism). On the methodological level, the debate challenges the existing methodological standards in geology and even forces us to redefine certain disciplines, for example historiography. Finally, the book outlines how, on the rhetorical level, the debate on the epoch of
man triggers different emotions, like a sense of nostalgia resulting from personal loss, outrage toward the irreversible losses, and existential fear or unease connected to the eschatological dimension of the debate (eschatology being approached here from a secular perspective). The discussion includes talk of a new level of awareness upon the end of time, of an “exceptional” and “truly never before seen” situation in history, as well as of this being the last chance for humanity, standing at the brink of oblivion, to protect itself from the risk of planetary systems destabilisation. Additionally, the debate may be easily interpreted as a serious warning and a final call to try to alter humanity’s fate.
Summing up, the book scrupulously reveals the exceptional potential of the Anthropocene debate, thanks to which it can become one of the most important discussions of the 21 st century. In this, the book assumes a metaphorical understanding of the term “potential”. To have potential means to demonstrate an ability to develop into something in
the future. Potential is the capacity to achieve or introduce substantial change. The potential of the debate surrounding the Anthropocene lies in its ability to generate a shock which will awaken humanity from the marasmus of the Anthropocene and subsequently open up human imagination to finally implement new solutions aimed at preserving our very selves and life as we knew it in the Holocene.

Prof. Ewa Bińczyk, PhD, works in the Department of Practical Philosophy at the Institute of Philosophy of the Nicolaus Copernicus University in Toruń. She deals with contemporary environmental philosophy, philosophical assumptions of ecological degrowth economics, philosophy of science, science and technology studies and controversies in science. She is a member of the Scientific Council of the Institute of Philosophy and Sociology of the Polish Academy of Sciences (IFiS PAN), PAN Forecast Committee, Council of Experts of the Polish Climate Coalition and Council of the Climate Education Foundation. She is the author of books:: Sociology of Knowledge in the Bible (Nomos 2003), A Picture that Captivate
Us (Universitas 2007), Technoscience in a Risk Society (UMK 2012), and also The Epoch of Man. Rhetoric and Lethargy of the Anthropocene (PWN 2018). Ewa Bińczyk is also co-author of Modeling Technoscience and Nanotechnology Assessment (Peter Lang 2014), co-editor of a selection of texts Studies in Science and Technology (UMK 2014) and Horizons of Constructivism. Inspirations, perspectives, future (UMK 2015). She was a scholarship holder of the Foundation for Polish Science (2005), the Fulbright Foundation (2006-2007), and a winner of the Polityka weekly’s “Stay with us” scholarship (2010). In the winter semester of 2016, she worked as a visiting scholar at Harvard University (Department of History of Science). In August 2021 she co-presented a seminar at the European Forum in Alpbach.

The author has given the association the copyright to publish the Ukrainian version of the book freeof charge. The translation and editing should be completed in August and the production of the e-book in September. The book will be widely and freely available as an e-book in e-pub and mobi formats. The motif used on the cover is the work of Ukrainian painter and conservator Olya Kravchenko.
Financing of the project (translation of the text, editing, graphics, production of the e-book) is basedon donations for the statutory purposes of the association, with the indication of this particularproject. This is due to the fact that large governmental and non-governmental organisations, towhich we turned for a grant, have to spend money according to pre-approved plans, and, after all, no one foresaw such a black scenario. Moreover, if anything, they are reacting
in a “here and now” pattern, considering the expenses involved in thinking about the upcoming reconstruction of Ukraine as premature. We take a different view on this. We would therefore be extremely grateful for your support of our project and your participation in the future reconstruction by contributing any amount to the account:
Association for the Support of Research and Conservation Initiatives

with the title “Donation for statutory purposes. Project: Ukrainian edition of the Epoch of Man”.

HOT: You also may use the PayPal button below to support our current project (Ukrainian edition of the book “The Epoch of Man. Rhetoric and Lethargy of the Anthropocene” by Ewa Bińczyk)

We also thank those who have already made such contributions!